Fabrication - Welding practices and rotisserie I

I'm on a roll, as here comes yet again an update!

This week we achieved a start of a rotisserie (for the frame work), installed an exhaust fan and shop computer, made a holster for the welding gun and generally "dicked" around in the garage. 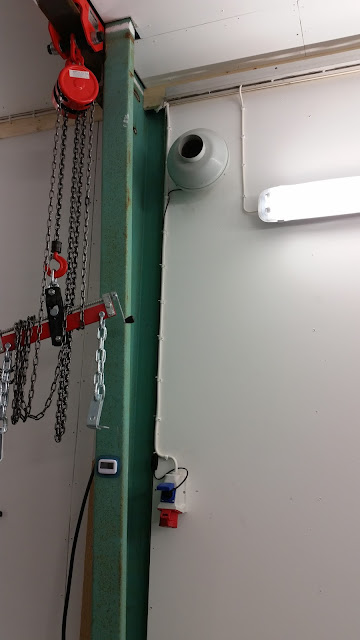 After the first welds in the garage, it was obvious that an exhaust fan would be needed.
So we drilled a 100 mm hole in the wall, stuck a pipe through it and mounted a fan to it. Might have to add some ducting to it as to gather the fumes more efficiently. 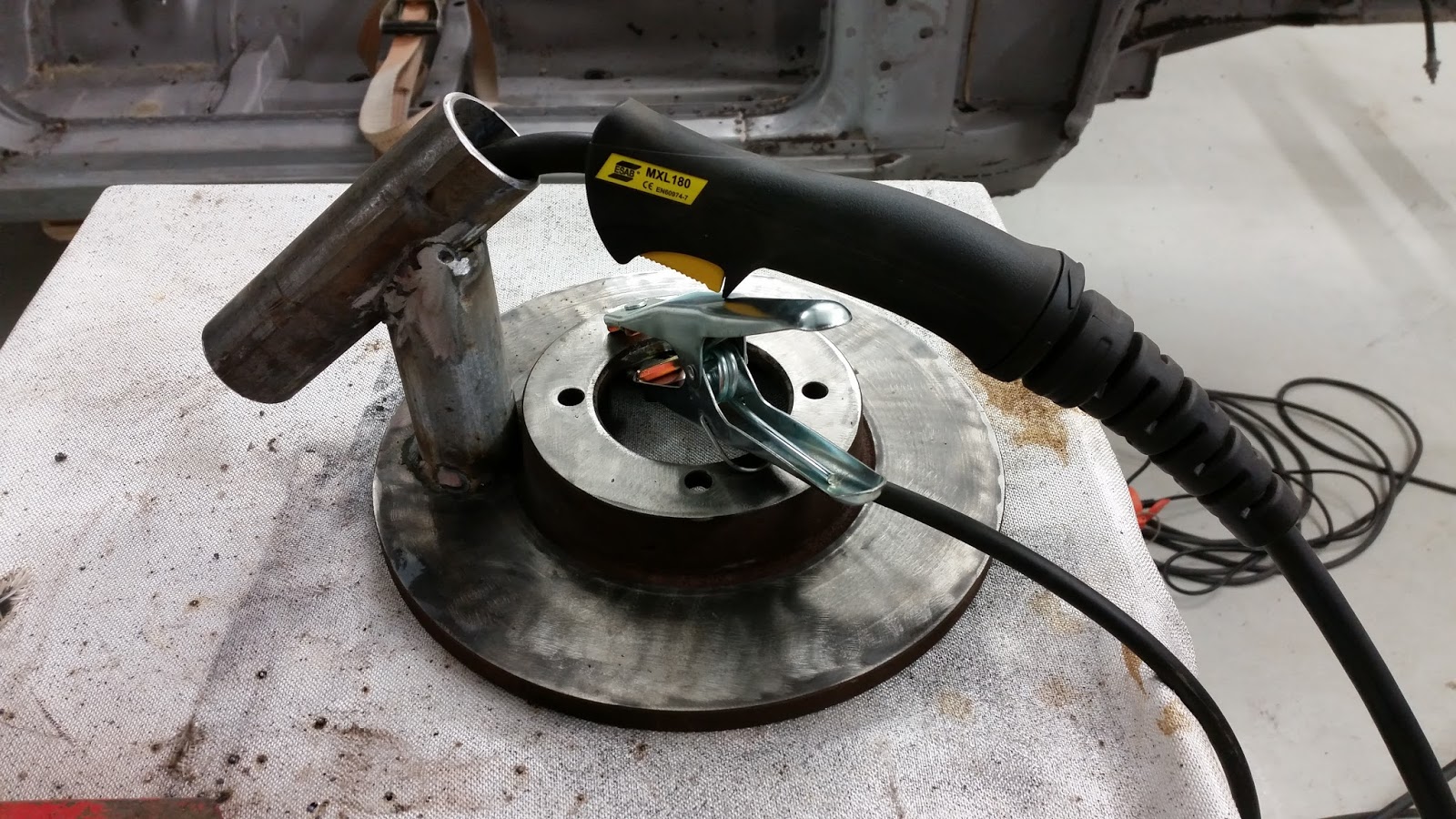 First welding project/practice was to make a holster for the welding gun.
Datsun's original front brake disc was sacrificed on the Altar of Fabrication and a few scrap pieces of pipe found their new homes. Welds are bit rough, but they get the job done. 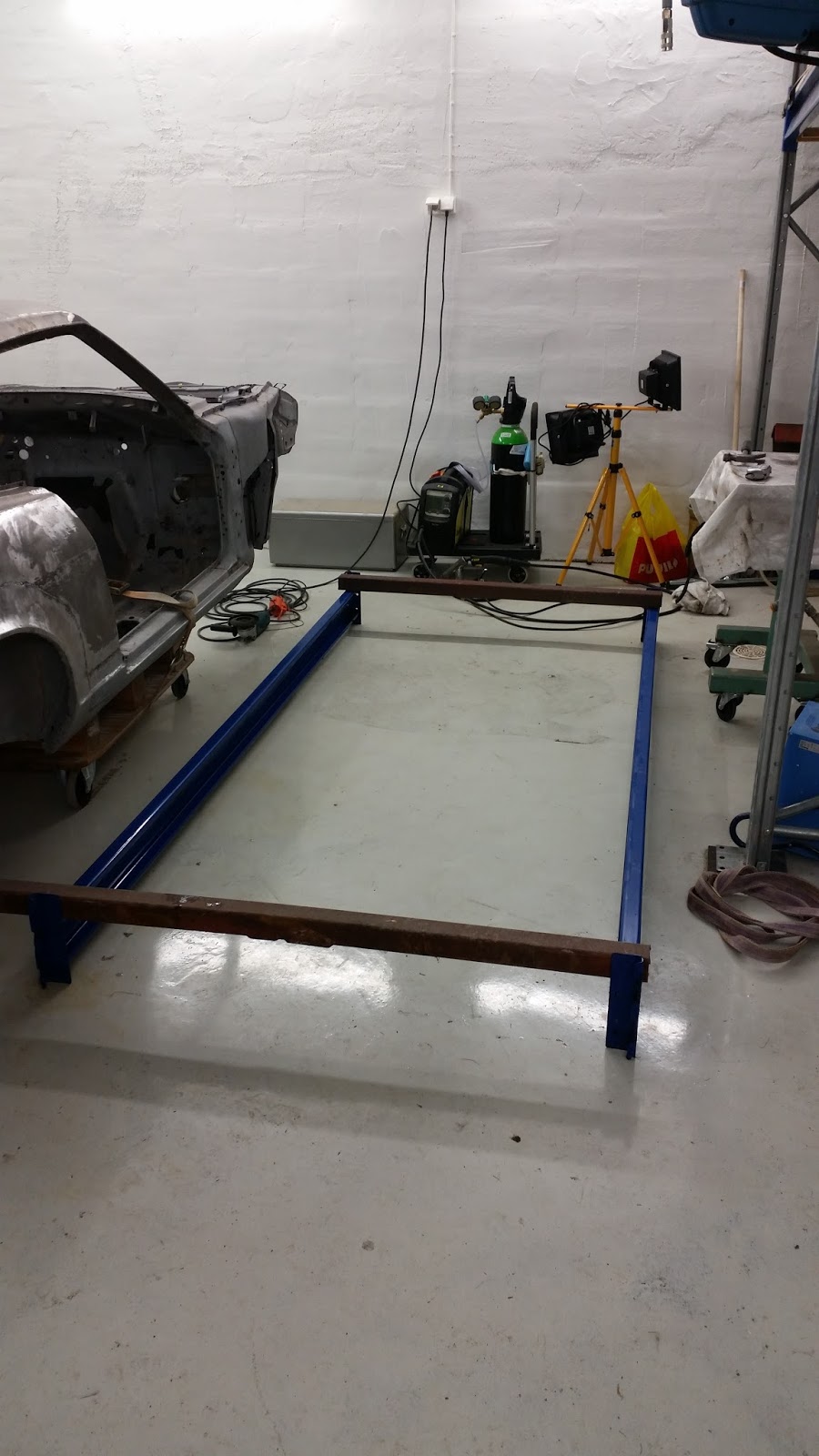 Next up was to weld a start for my rotisserie.
I used a pallet shelving beams, as they are rated for 3000 kg's per piece and they were readily available. Also they are reasonably rigid and don't flex under load.
Scrap pieces were used for the cross members. This factoid could have been guessed from the rust on them!

Pallet beams are spaced so that the distance of the beam centers is 130 cm. This way the seam beneath the doors and running under the cockpit of the car, is on the center of the beams and can be interacted with clamps, that fix the car on the rotisserie.
I also might have to study fixing points where I can bolt the car to the frame even more rigidly. 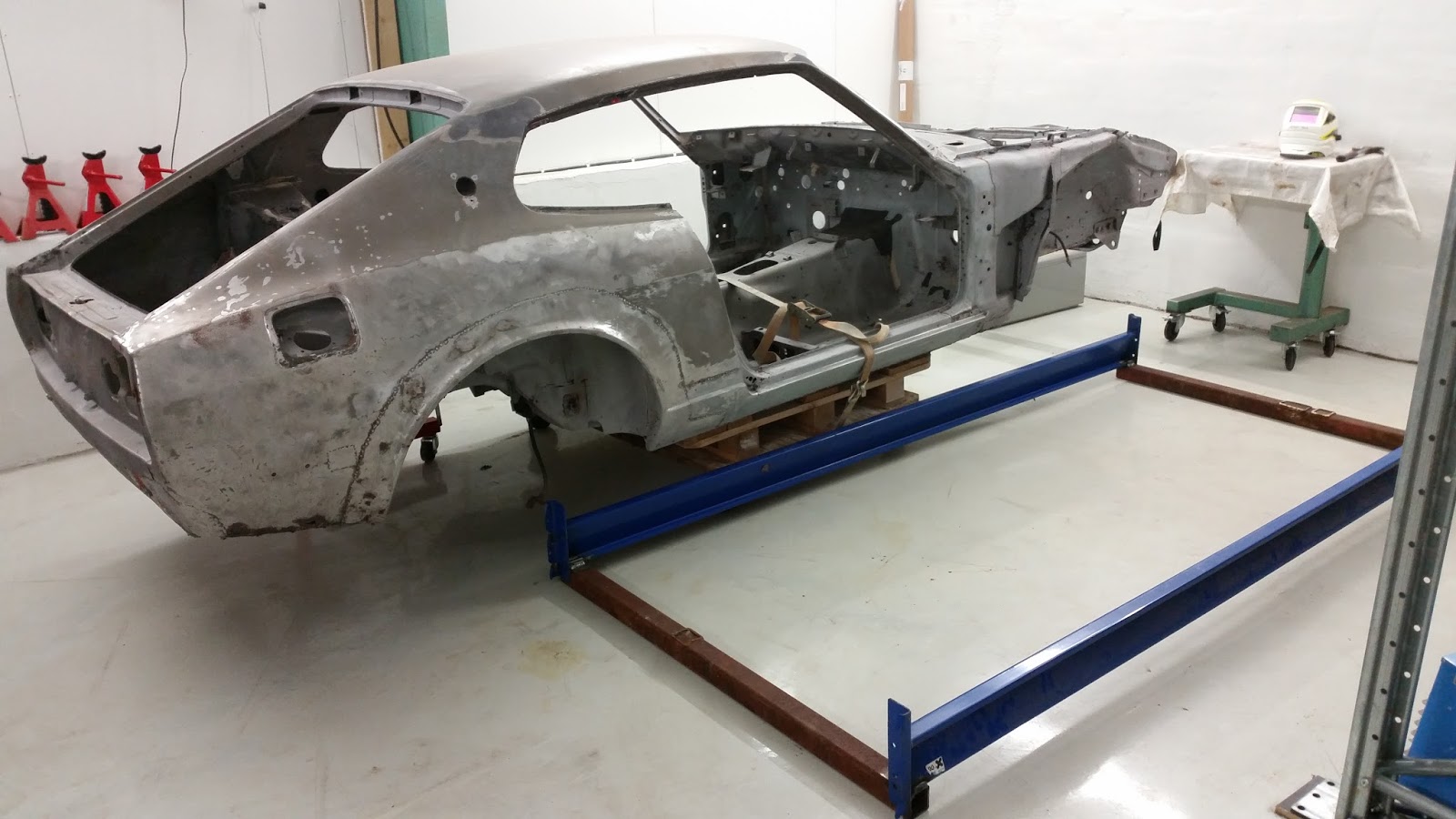 The situation where the project was left after the weekend.
After checking many times, the frame of the rotisserie is true down to the millimetres. Should be adequate... I hope.

Next goal for the project is to make adjustable feet for the rotisserie.
These I'm going to do by taking two square profiles of steel that overlap. Weld a cap on the inner one and a nut on it, so that a threaded rod can go through the cap and the nut. The threaded rod is to be mounted in a way that it stays fixed, but can spin freely on the assembly.
This way I can extend the legs as I wish by ratcheting the rod (limited by the designed max. height of course) and also level the whole contraption.
I'm thinking between 50 to 100 cm for the max. height. This would mean between 4 to 8 metres of two different square profiles.

With the rotisserie, I'm aiming to keep the car square and level during the welding phase of the project. Hopefully, I even can fix the crookedness of the shell, if there is any, and make the car better than new when re-doing the frame beams and floors.

Similar rotisserie is used on a project I'm watching on Youtube, called Project Binky by Bad Obsession Motorsport. Thanks go to those guys for the general idea! 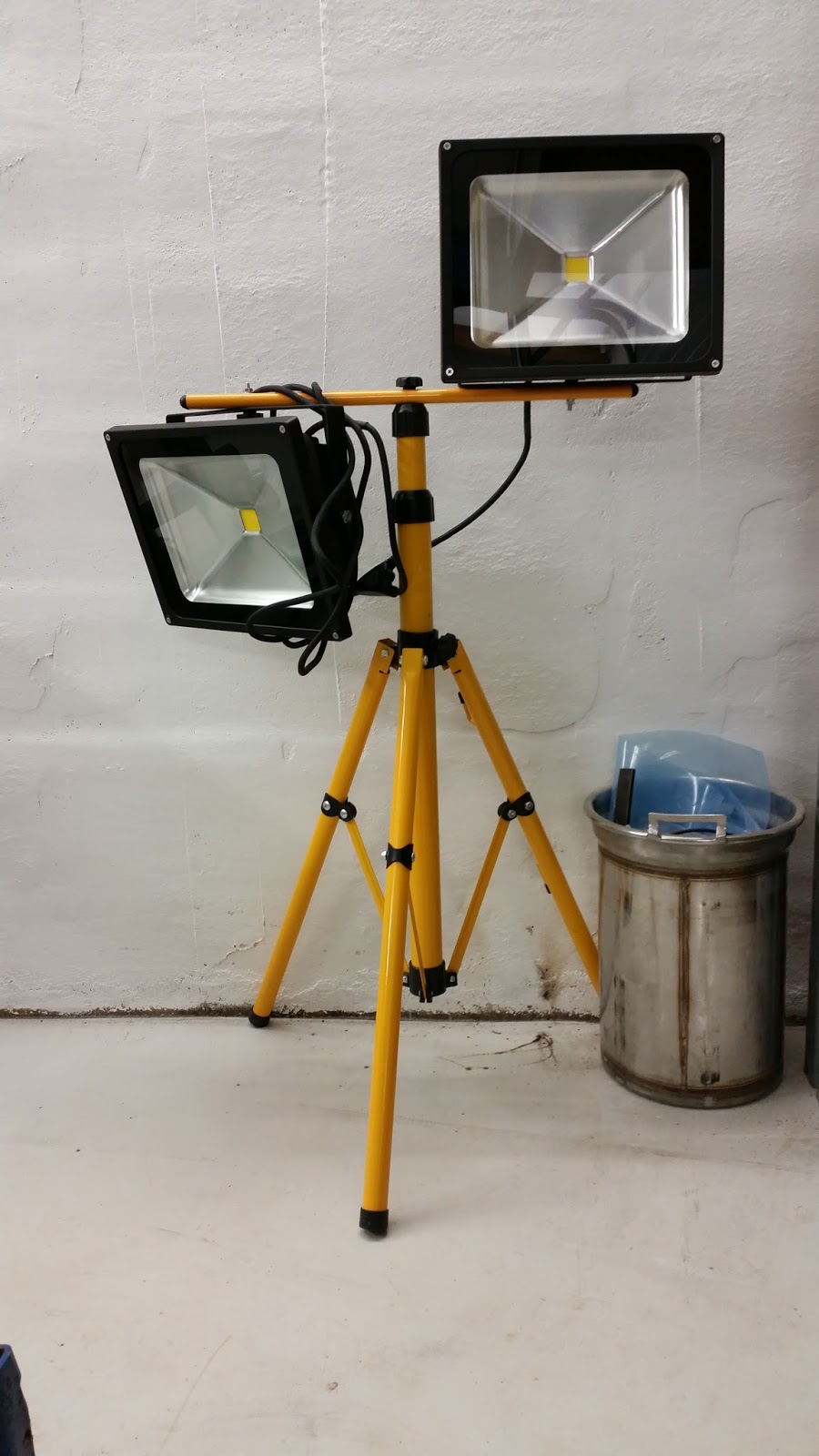 More light!
The lighting in the garage is pretty good as it now stands, but one can never have too much light! This system was on sale and features two 50 watt LED work lights and a tripod stand. The tripod is a bit flimsy, but the lights are very powerful. 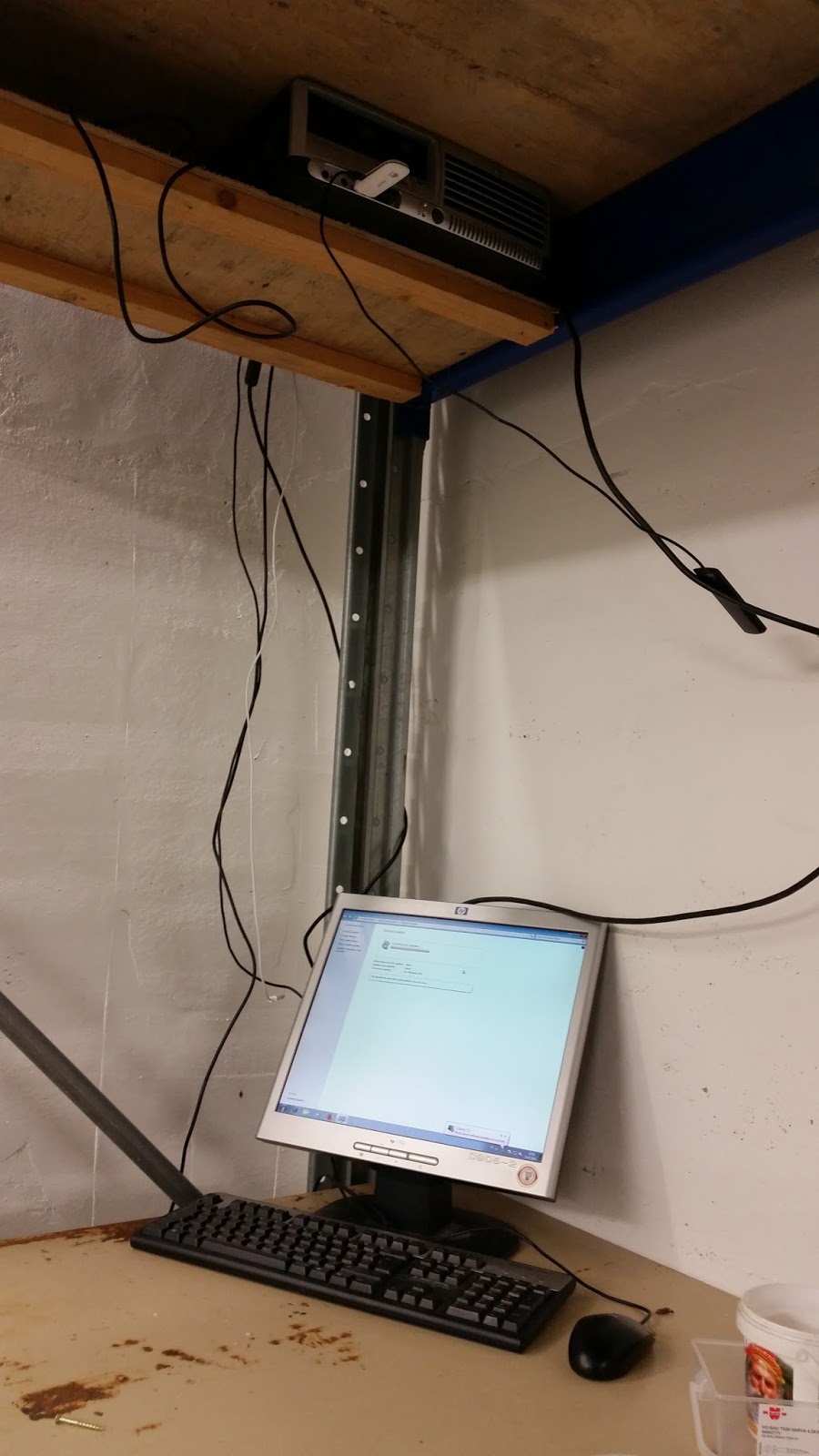 Shop computer under updating...
I'm planning to use this as the source of music (Spotify), database for manuals and instructions, as my project planning/tracking platform, as Nissan FAST machine and also as a VAG-COM and ElsaWin computer for my dd-Audi. Hopefully the VAG-COM cable likes cable extensions...
Don't mind the cable management; this is only the first try and cables will be and are neatly packaged.

A side note:
I'm sweeping the floor after every major day and organizing the tools, as this way the work is much more enjoyable and faster. The 5S-principle is mighty fine in this!
Now only if I could follow it in our/my daily life also...Well, I do try!

So lots of words for such a mundane tasks, but "slowly and surely" is my motto in this project!
Lähettänyt OPTaiva klo 22:27