During the last weekend I finally have "completed" the rotisserie or as I have started to refer to it: "the Sled". Also I managed to lift Zeta on top of it and make "adapters" on which Zeta rests on the Sled.
This only took few months to achieve so the project is on track... I wish! 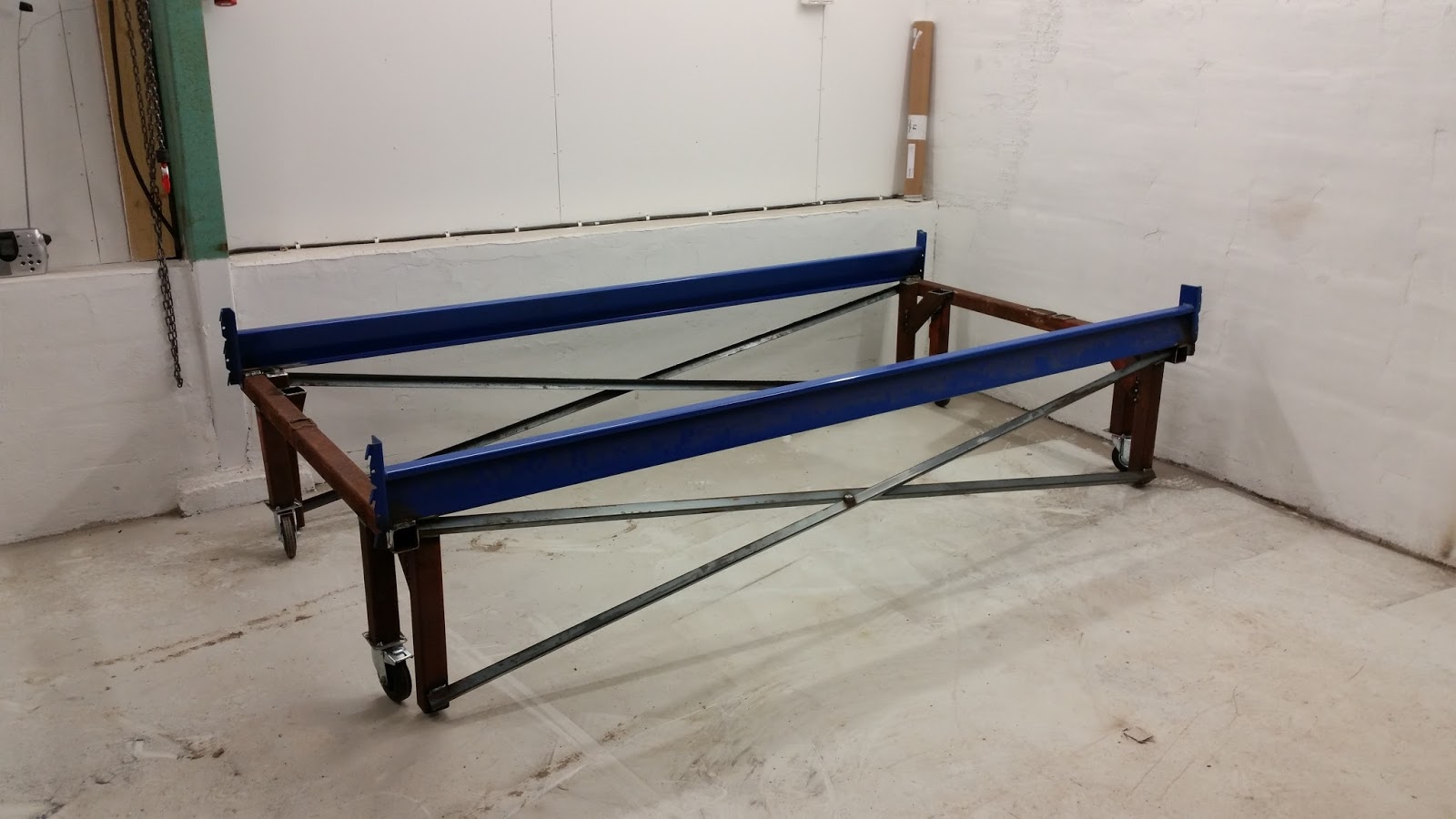 The outcome of this toiling away in the garage.
It doesn't look much, but it's sturdy, it's designed for this car and I have made it so it must be very good. Jokes aside, the Sled is rather sturdy and the spacing between the longer sides is 130 cm from center to center. This means that the seam on the car runs nicely in the center of the beams as one can see from the following pictures... sort of. 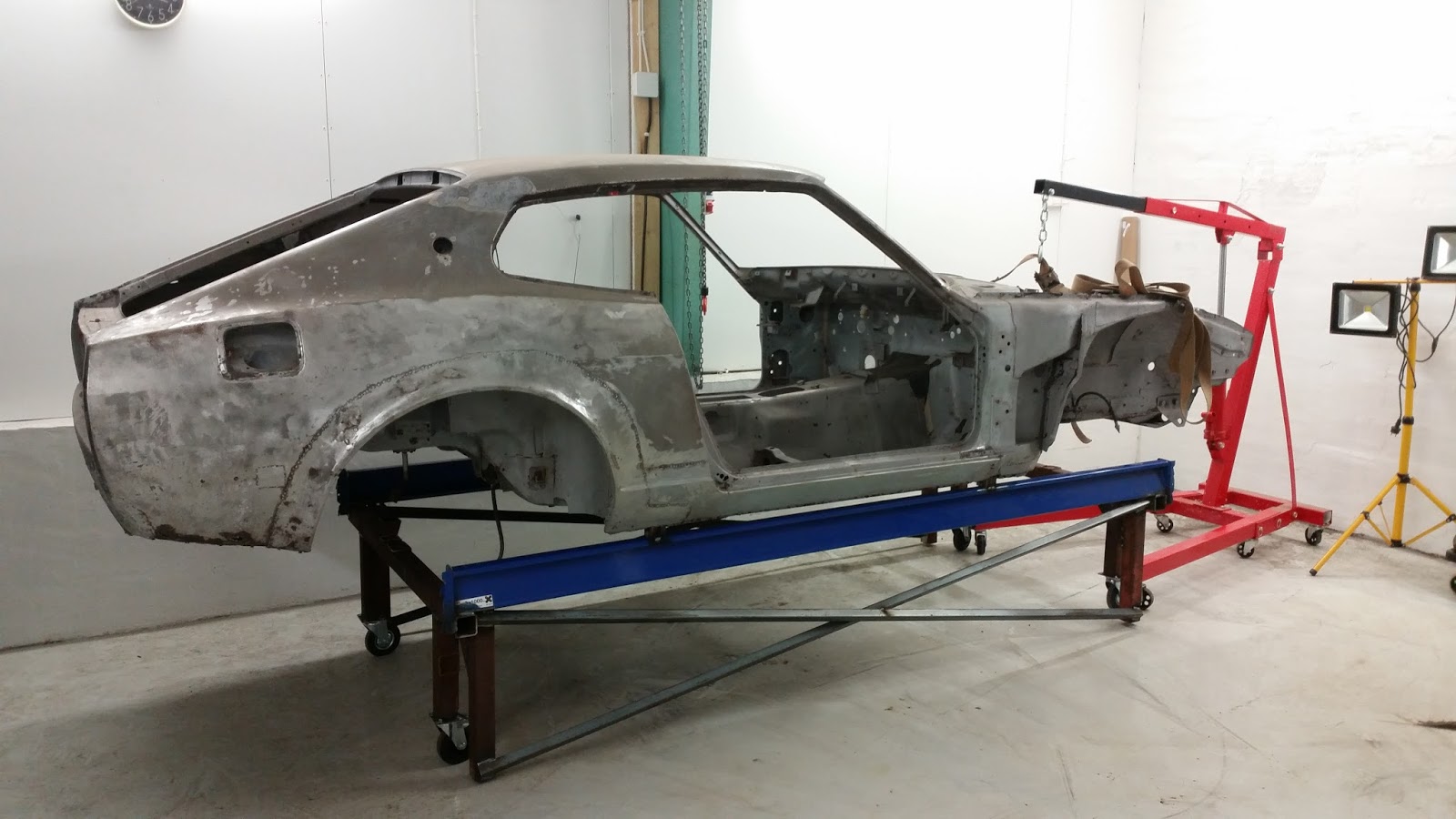 It only took three lift attempts to get Zeta on top of the Sled:

First to see if the lift points will hold (they did) and to notice that in order to get Sled under the car, Zeta and Sled first have to switch places. So Zeta out of the garage and Sled in.

Second to test if the lift points will hold (they still did) and to notice that the boom on the engine crane was too short in its current setting. So car down and I extended the boom to the right length. I used the engine crane on the back and the beam mounted chain hoist in the front. At least it was very easy to lift the shell with that kind of set-up.

Third time managed to roll the Sled under the car and lower it to the beams. After checking that it held for a short time, I strapped the car to the beams and moved the whole contraption to its "rightful" place. 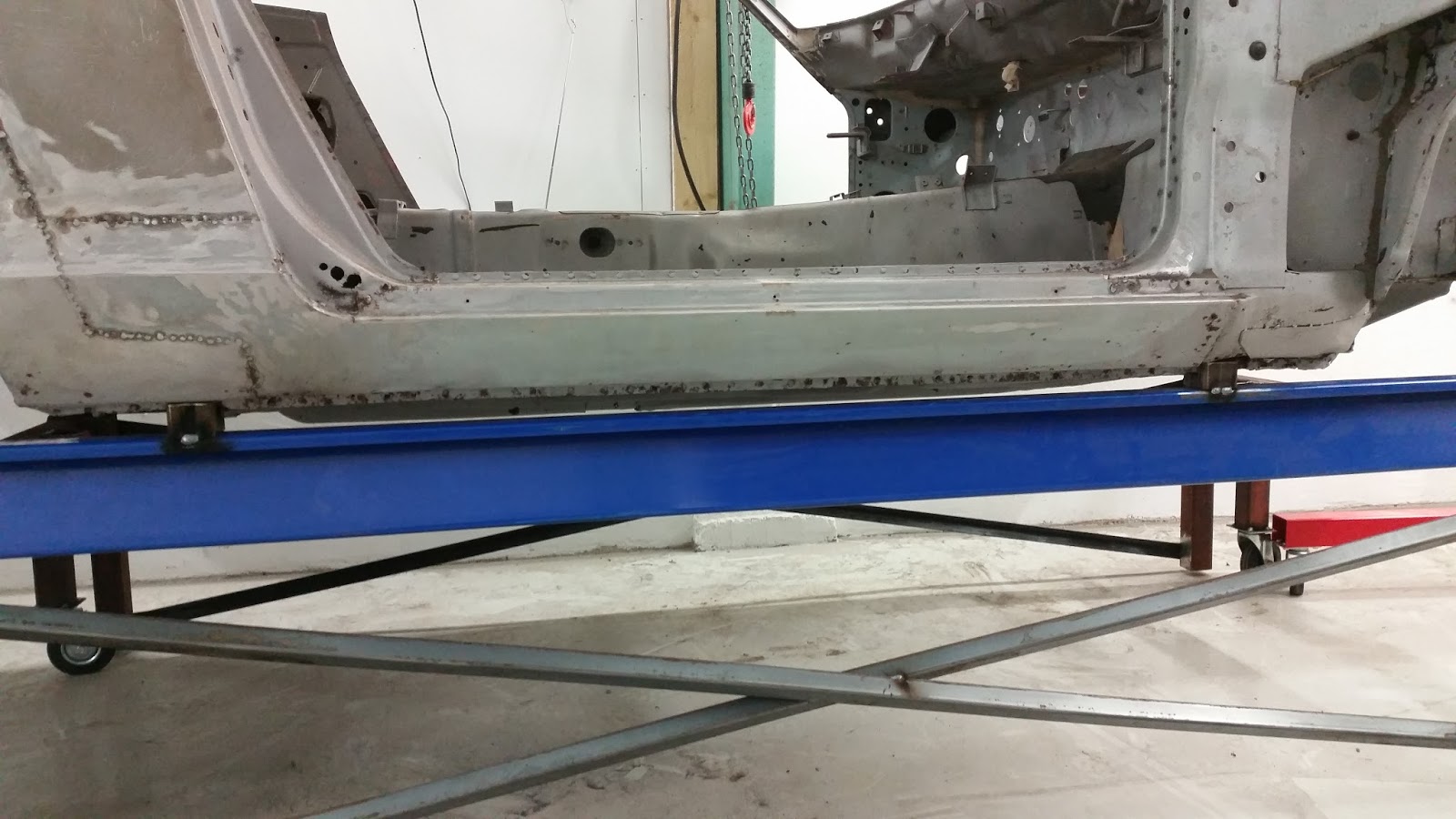 After a short thinking brake, I made these profiles you can see under the car. They are just profiles that have grooves cut in to them so that Zetas' side seam will rest in it and the car won't move or fall. The profiles are welded to the beam, but I might have to add few more welds to them just to be sure.

Second...
I sold the RB20 motor with all of the other engine bits.
The engine was a bit too small for my dreams and a bit too old and beaten down. So to keep things interesting, I found a rather nice replacement.

The coming engine has six cylinders (in-line), 2.8 to 2.9 litres of displacement with a turbo or two, about 270 horses of power from the factory, vast after market support right here in Finland and in Nordic countries, has been made from 1999 to this day and last but not least it has the potential to develop 400 hp and 500 Nm with small tuning.
With more extensive tuning 600+ hp is not out of the question. Also with this engine the gearbox selection is more varied and I can have a ZF gearbox with 6 gears (tested to withstand 1000 Nm of torque).

Well the motor will be unveiled sometime in the future. First I have to see if the shell is fixable and how it develops.
Got to say though... can't wait to buy that motor!
Lähettänyt OPTaiva klo 17:59