This update is going to be a bit mixed due to work being done with new driveline, patch panels and a little bit of garage alterations.

So "lets get to work", as Tom says on his videos!


First up, the driveline components and engine along with some garage "remodelling":

I spent a weekend at the garage and first thing I did was to go and pick up some parts. So I drove on Friday to the garage and left to get parts on Saturday morning and drove over 400 kilometres total on that day! 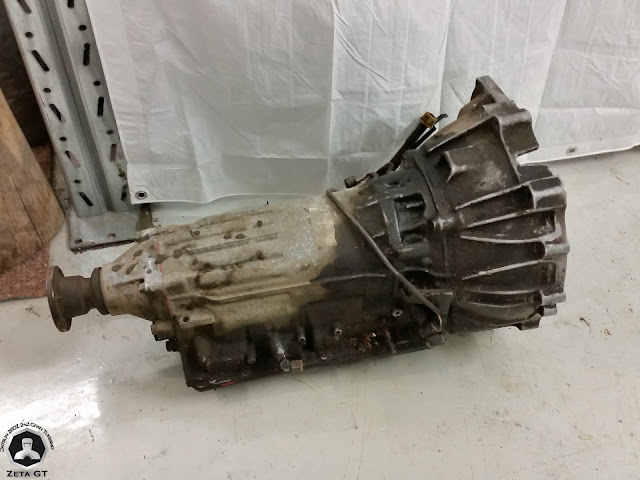 First stop was in Tampere to pick up this; a busted aw30-43.

The transmission is used for example in the Toyota Supra and Volvo 960, but as this is broken and automatic, I'm just going to use its bellhousing to mate the actual transmission to the coming engine. At least I hope that this bellhousing can be used... well the box was only 40 Euro, so not a huge loss if all goes "tits-up" with it. I can always dismantle it and study it a bit. 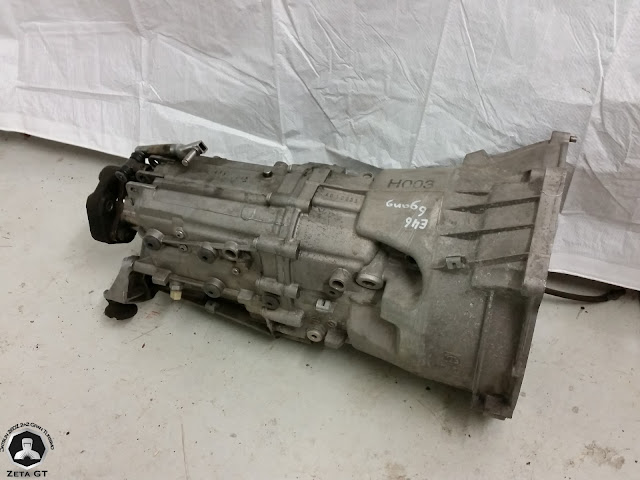 And now the real McCoy, a six geared ZF GS6-37DZ from an E46 BMW diesel straight from Germany.

This example should be barely driven-in as the cars mileage was only 133k.
For this project, this transmission should be quite adequate as they are pushing about 700nm of torque through these boxes.
The big brother of this box is called the GS6-53DZ and that is suited for about 1000 or more nm of torque. 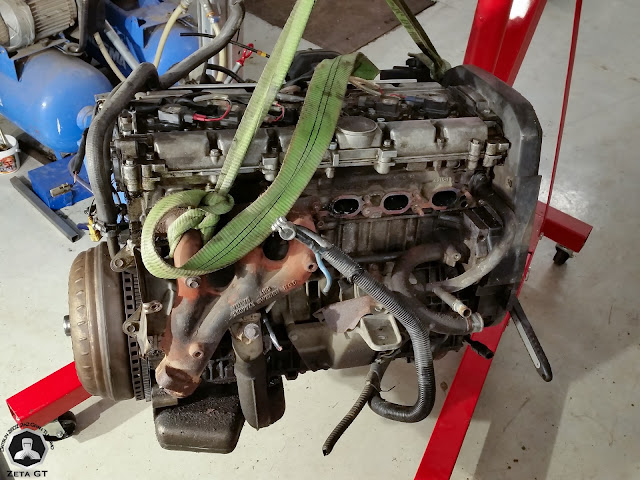 Next, I set my course to Turku, where I picked up this parts engine.

This engine in question is called the B6304F and its made by Volvo. As this is the parts engine, it means that the actual engine will also be made by Volvo; a B6284T aka 2.8 litre turbo T6. 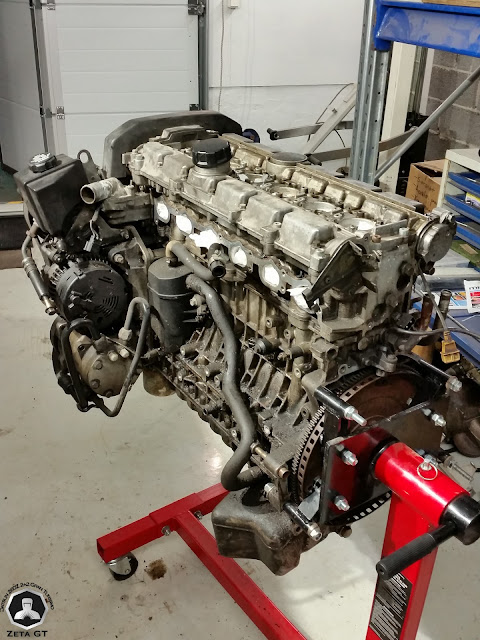 I'm going to use only the head (possibly) and all oil related parts from this motor in the T6, as this 3 litre engine uses a rear sump oil pan straight from the factory. Also engine mounts might be used...

Almost all parts are interchangeable between Volvo's I6 and I5 modular engines and even though this engine is from the 90's and the actual project engine is from 2003 (driven 115k), the head should bolt up with minimal hassle. 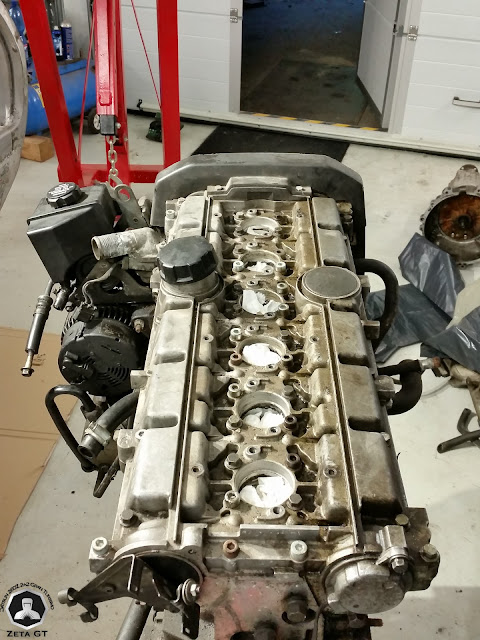 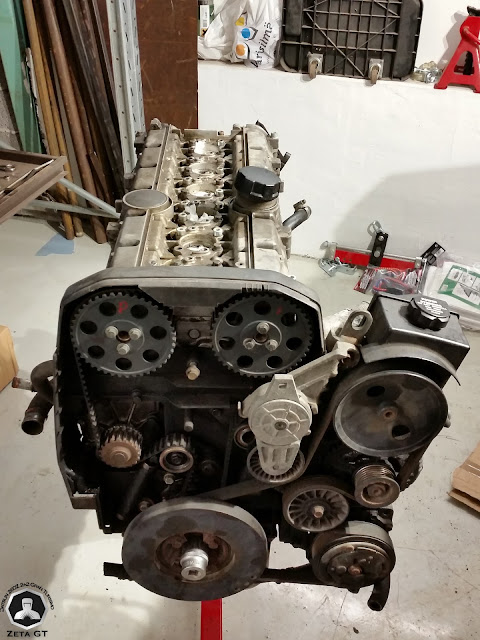 The view should clear up a bit once the project engine is built.

I'm not going to use the power steering pump or the a/c from these motors so the package should thin out quite nicely and be as compact package as a Toyota 2JZ or even smaller. 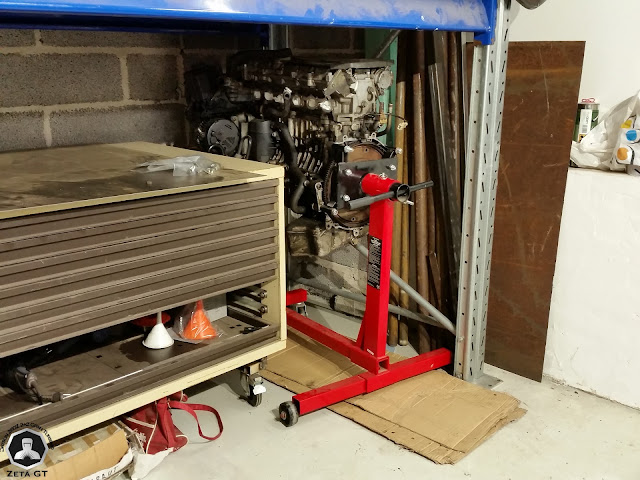 The resting place of the parts engine.

There was just enough room for the stand and the motor, so I got it out of the way and out from the elements e.g. dust and sparks.
Engine will wait for head removal and further dismantling here in the garage, as I start working with the T6 engine in another location. 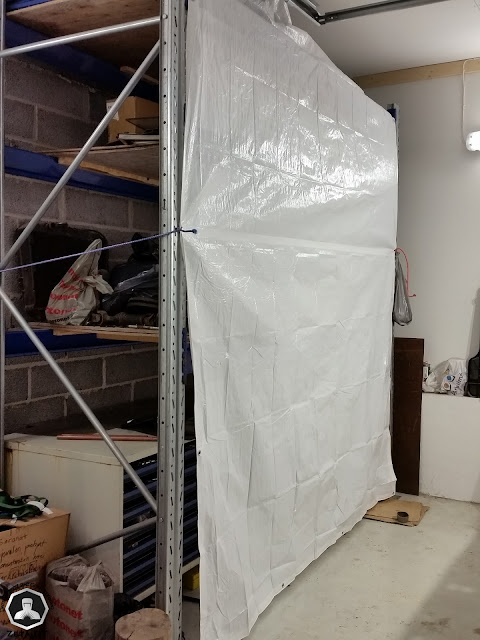 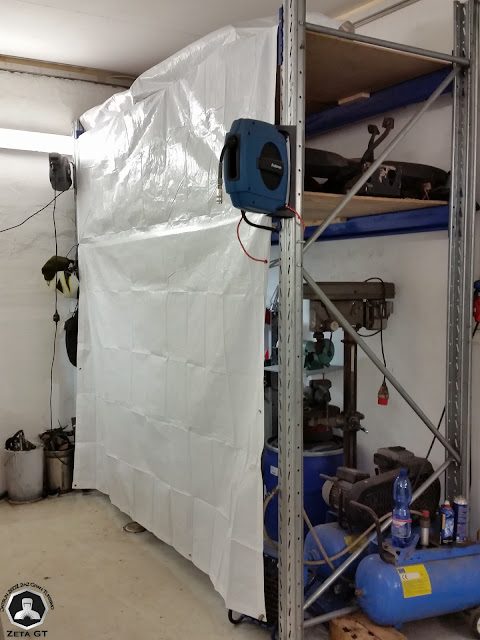 I needed to get the motor for example out of the dust and sparks so I bought some tarps and hung them with tek screws from the pallet shelves.
Now the dust and sparks can't fly so easily on to the shelves and over the parts. These tarps also reflect the light so that it is not wasted on illuminating the storage shelves.


Next up, some patch work: 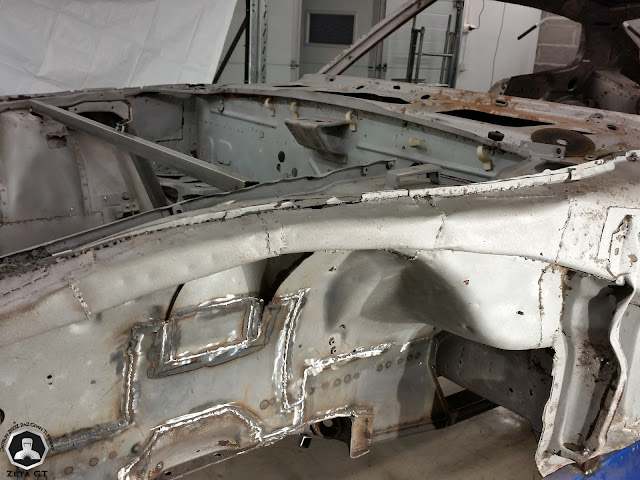 This frame rail or what ever you like to call it, has been repaired quite badly some time in the past and it has to be rectified. 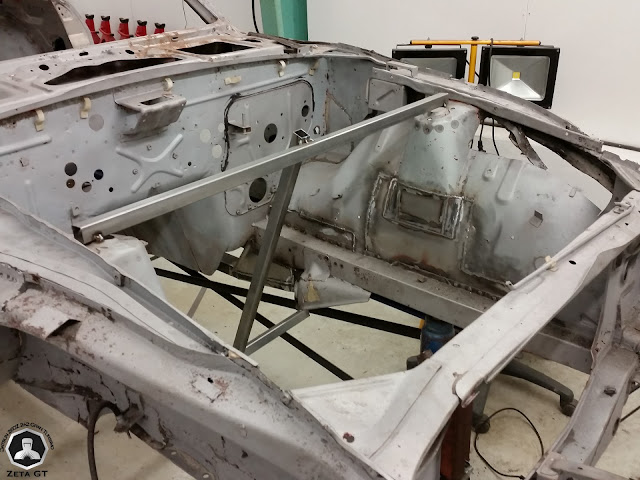 I started the work by welding some braces to keep the suspension towers from moving and then cutting a large chunk out of the sheet metal in the wheel well as I was going to replace that before the "upper frame rail".

Then I realised that I should just cut the upper frame rail off, make the patch panel for the wheel well and then make a new upper frame rail at the same time fixing some design errors aka nooks and crannies the original design leaves. 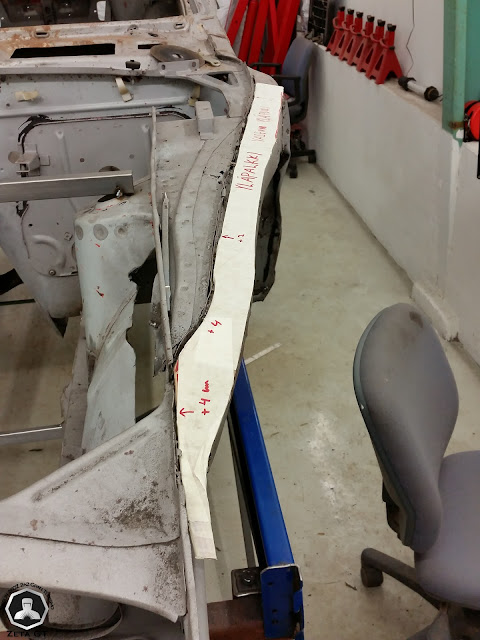 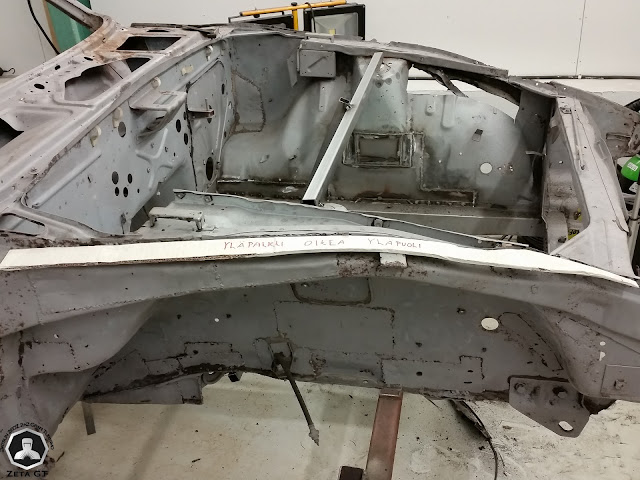 First task in this job was to make some patterns out of the existing rail and luckily they are interchangeable between the left and right side.

As the rail is quite complexly shaped, I will be making patterns out of the three sides of the rail and weld them together and thus make a new and improved upper rail from 1.5mm sheet metal.

Unfortunately this was as far as I got with this task so work will continue some other time.


As I mentioned previously, I will start working with the actual engine as soon as I get it, but I'm hoping that the courier will drop it off come next week.

I will be updating those parts of this project in posts labelled as Engine, so check up those and have a nice one!
Lähettänyt OPTaiva klo 22:14