After a short hiatus in updating this blog, here comes an amalgam of few weekends.

Lets start by fitting the oil pan from the Volvo B6304F engine to the newly modified ZF GS6-37DZ transmission. 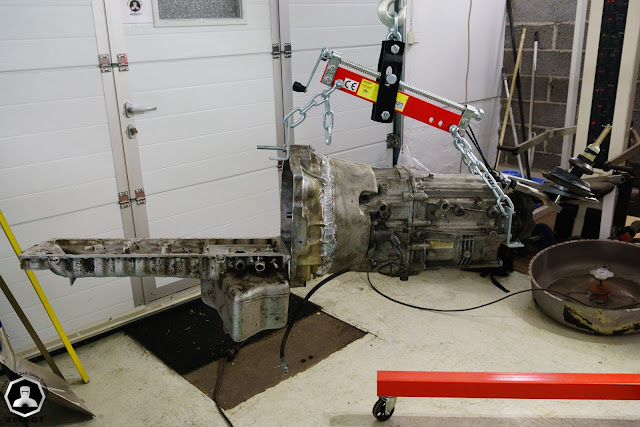 Oil pan fitted to the transmission and hoisted up in the air. I also attached the shifter assembly temporarily to the box with zip-ties.
During this time, I took "accurate" measurements of the assembly, so I can see how much to cut of the firewall and also to share the information to someone who might need it and reads my ramblings. 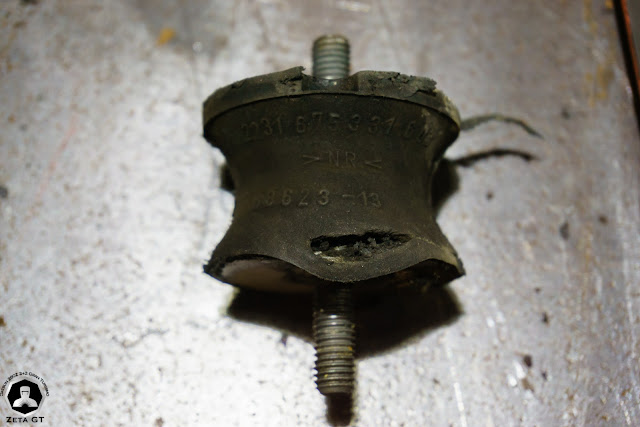 Before I could mount the assembly to the engine crane, I needed to take the BMW transmission mount out and at this time I noticed that the bushings were "slightly" knackered. 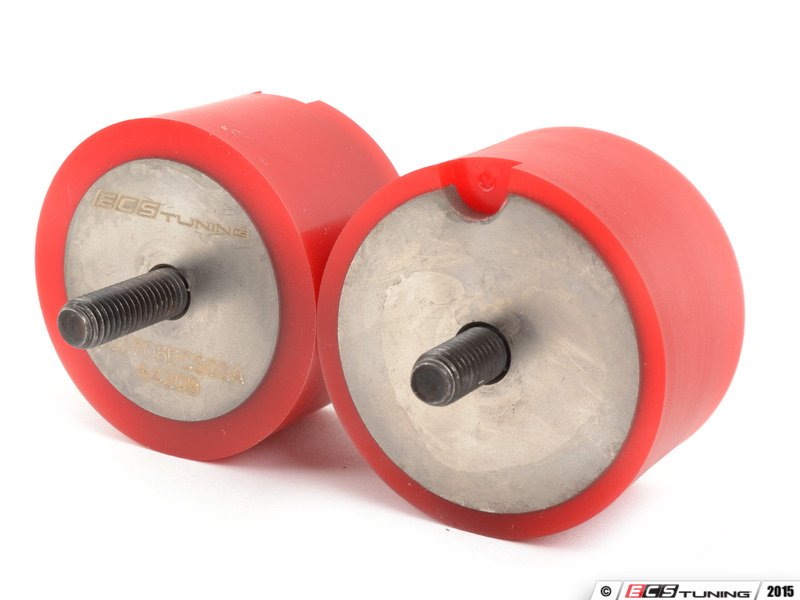 I will be changing them to these Polyurethane Transmission Mount Set - Street or similar as there are quite a vast offering for these gearboxes. 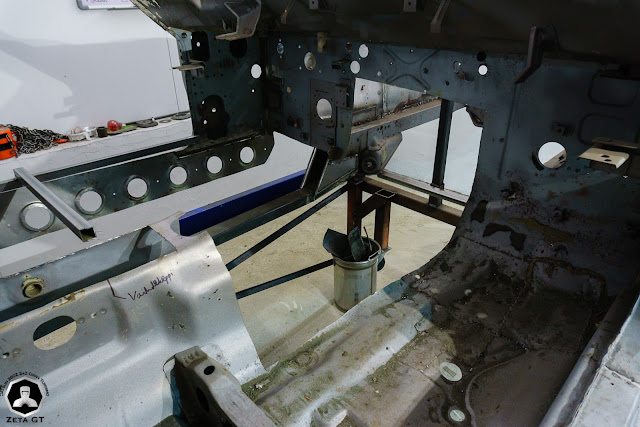 Here you can see the aftermath of few minutes of cutting disc action.
I cut the cubby holder out (left most hole in the picture with the writing) and at the same time the front part of the transmission tunnel.
The writing and the line marks where the middle of the shifter assembly will go.
That is 150mm further back than the original shifter and the firewall will receive the 200mm (IF I would like to enter this car to the Finnish Time Attack series some time in the future, the maximum I can move the firewall is 200mm) deep pocket for the engine... Hello front middle engine Z! 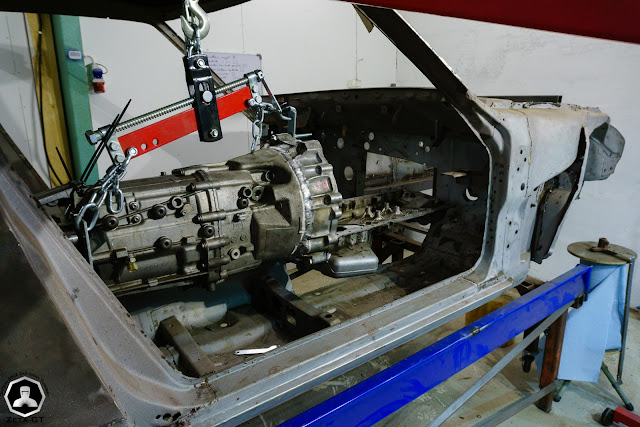 Easiest route for the driveline assembly to go in was through the passenger side door. 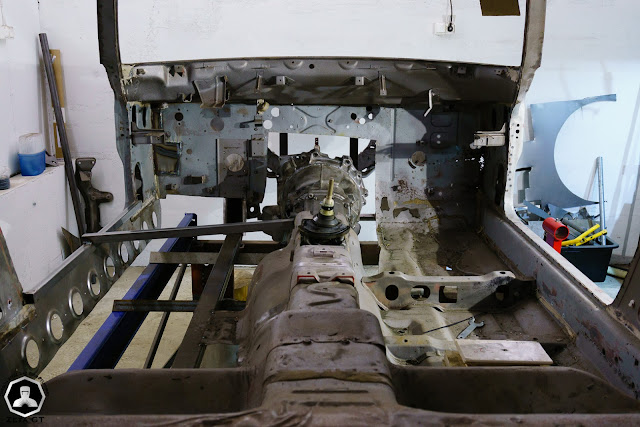 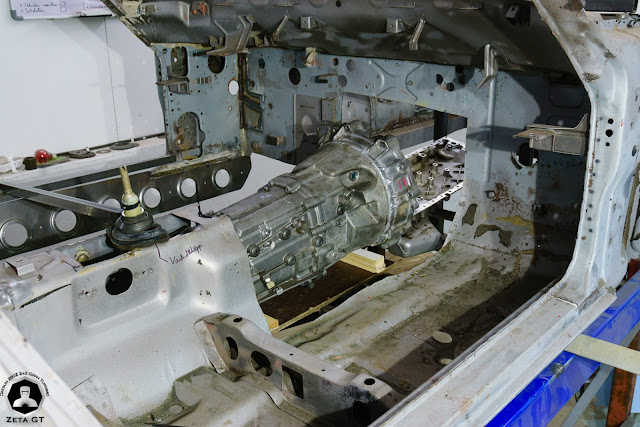 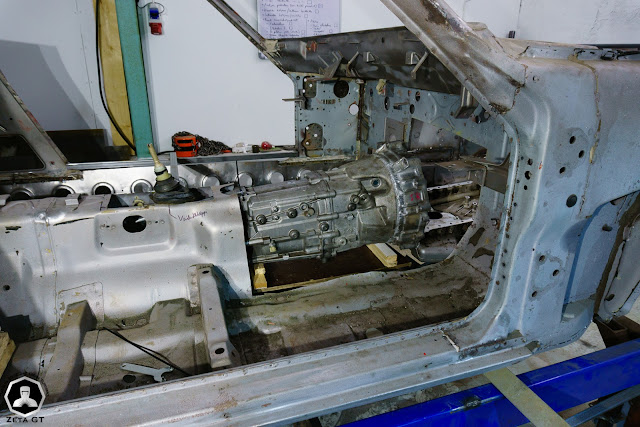 After much fiddling and mucking around, the package was in and in right position.
It's quite a package, but should be doable (I really really hope so) as long as I get all the measurements right and think this through...
Measure once and cut two times, or how that saying goes... 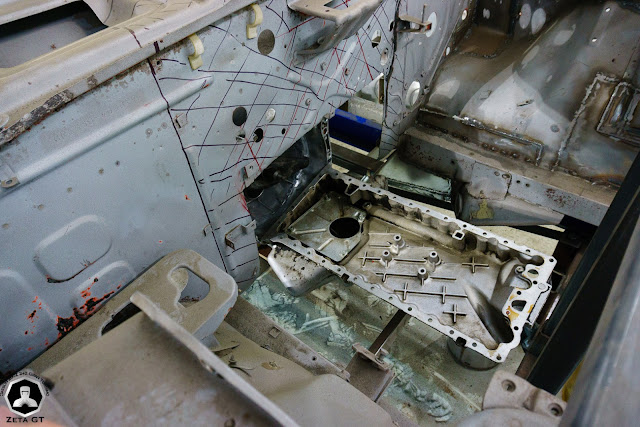 As one can see, the front of the oil pan will sit just behind the front axle line and thus free quite a lot of room in front of the engine for some serious cooling capability and more importantly move the center of the gravity towards the middle of the car.
Also there could be a nice room for the turbo in the old battery location... we shall see, if that's feasible! 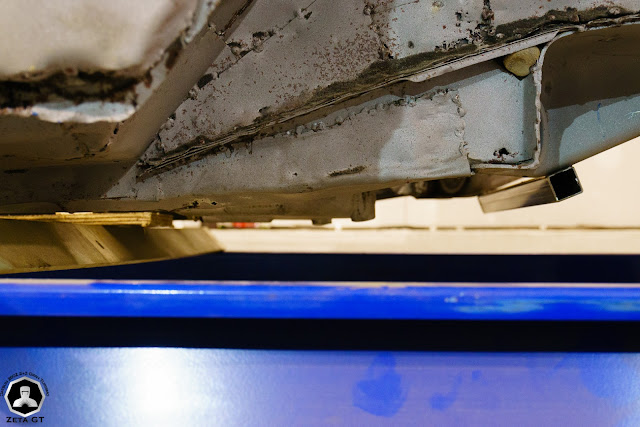 I'm not planning to stance the car or make it obnoxiously low, so this should be quite good.
Although, if I could shorten the sump, then the package could sink a bit lower still. Another route is a dry sump system for maximum lowness of the driveline package.

It's a bottomless pit... a real life Pandora's Box! 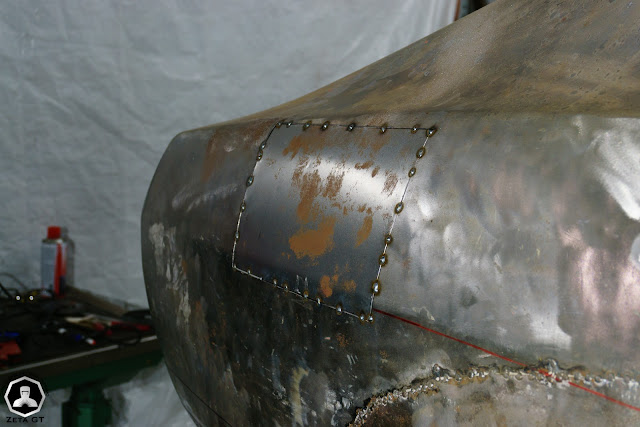 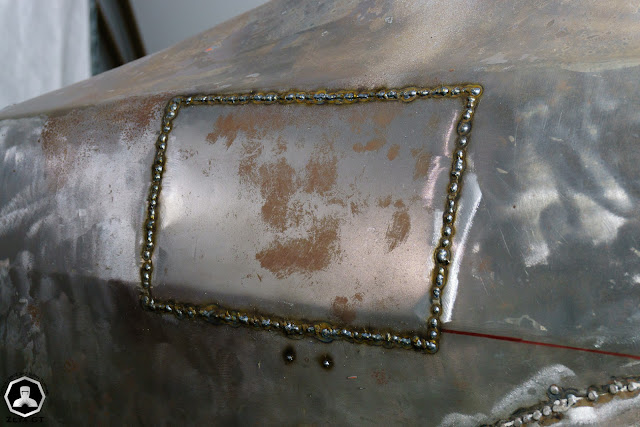 After these escapades, I needed some other things to do, so I welded the fuel filler delete in place.
Fortunately it was quite chilly in the garage at around 10 Centigrade so no larger warpage to be seen as the metal did not heat too much.

Final results will be seen after grinding the welds, but might be quite nice with minimum body lead needs. 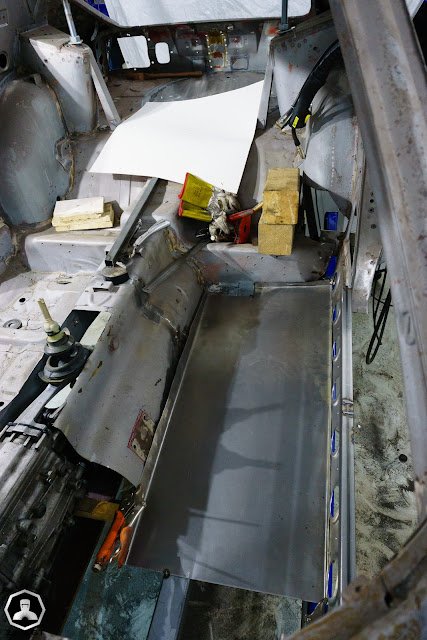 For me to be able fit a seat in the car to gauge the shape of the firewall and transmission tunnel, I need some flooring. 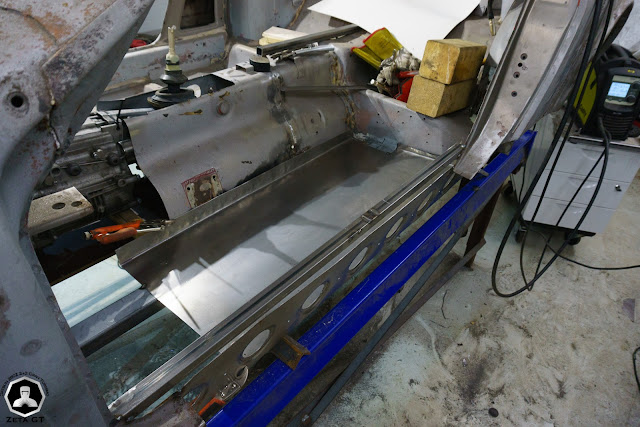 Flooring is done from 1mm sheet metal and bended by hand with various clamps and profiles.
Here a sheet metal brake would be really nice, but I'm quite happy about the outcome! Nice straight bends and accurate measurements.
I'm using the center of the carosserie beam as reference and as it now stands with the floor and edge of the kicker panel, they are as center as I can get them. 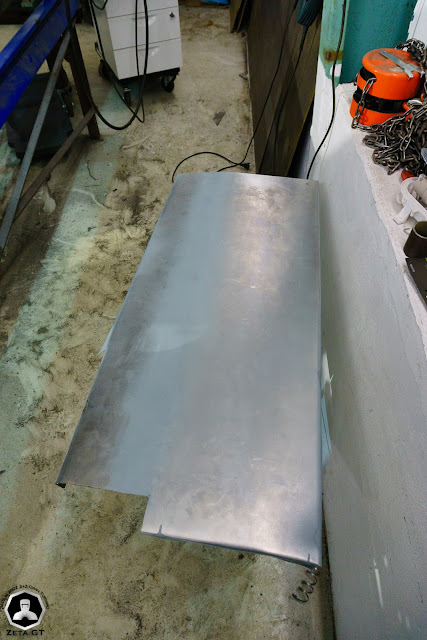 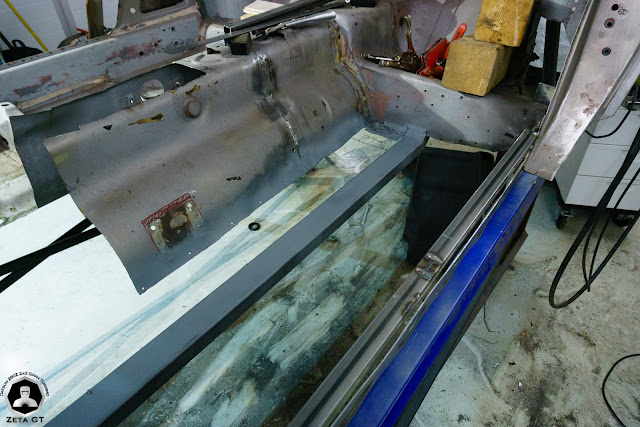 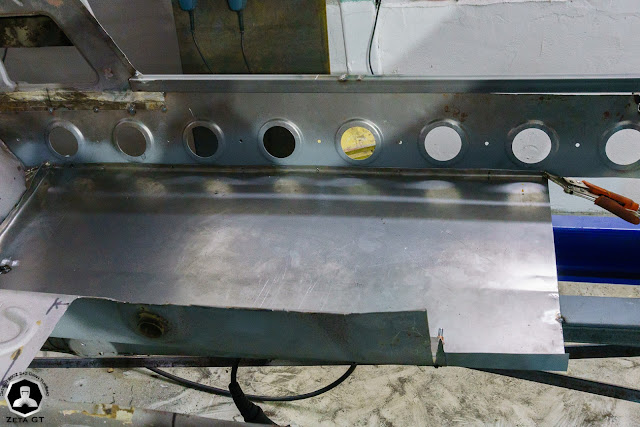 Before I could weld the panel in place, I sprayed the CRC Zinc on the parts where-ever there would be metal overlapping. 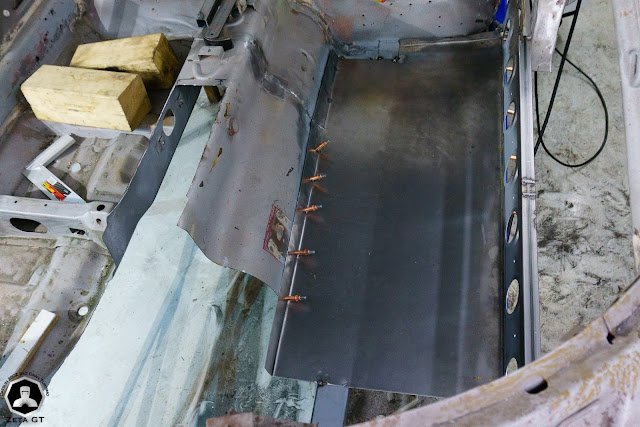 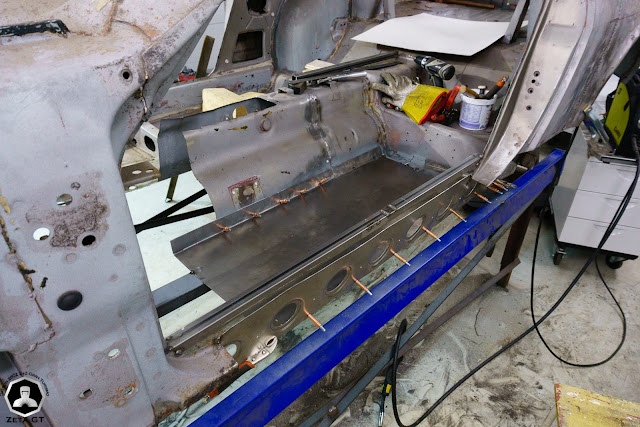 Attached for welding with Clecos and vise grips.
Those Clecos truly are nice tools to hold multiple sheets together! 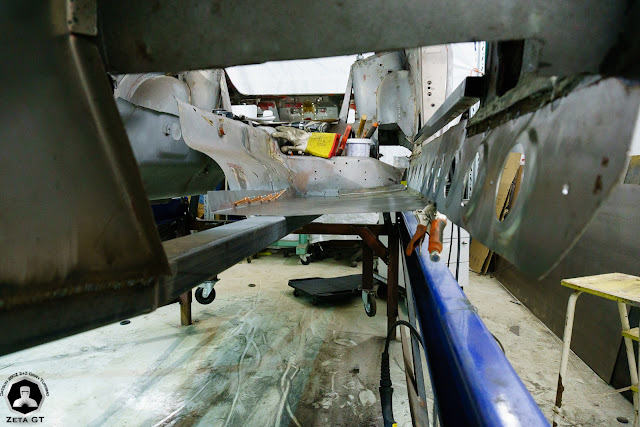 View from the front of the new flooring.
I decided to make the floor from few pieces as I would in any case need to tie the coming transmission tunnel to the flooring so few more seams are not going to brake the bank in this project. 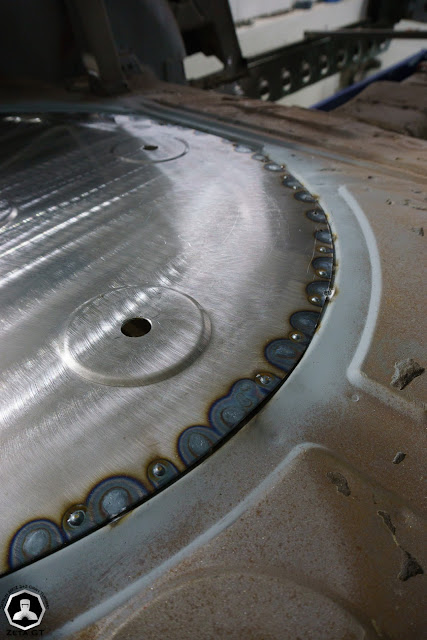 Some might have noticed that the new flooring is flat.
I will be making these kind of dimples to the floor and weld the majority of the 22mm holes shut with planking plates, but plug few with rubber plugs and use them as water holes if need be.
Should stiffen the floor quite nicely!